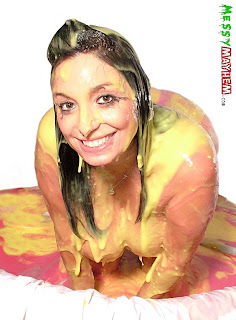 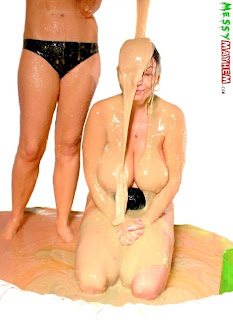 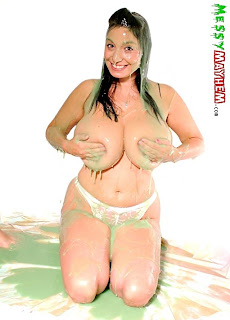 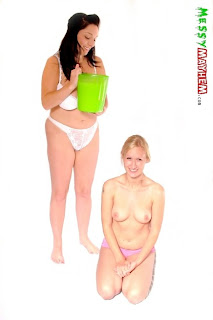 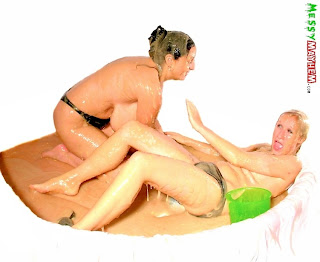 Greetings Messymayhem brethern of the blog!

Another bloggity blog for on the go, twice in one week, I must have agreed to this whilst I was under the influence of appley sours!

Those who are in the know, know that we now have 2 (count 'em) 2 download stores. The fresh gunge and stuff goes on the Vidown store which you'll find here on www.messymayhem.com and now the archive stuff is on our brand new spanking UMD download store, via the uber WAM portal the Ultimate Messy Directory available at www.umd.net

So for the rest of the blog its a tale of two Michelles (and an Annabelle too)
New to the UMD Store is Episode 2 starring Michelle Bond and Annabelle, which has been fairly popular! All 3 vids and corresponding hi res pic sets are available to download at http://umd.net/downloads/site/messymayhemcom

Part 1 - Don't Laugh or You Will Lose
Our game of skill, dexterity and all round general lunacy, sees the plucky Anabelle trying to crack the stone faced Michelle. Yellow, pink and green gunge await the loser who smiles and giggles throughout as she gets one heck of a gunging!

Part 2 - BRQ
Annabelle and Michelle play a game called brq, but what is the game? We certainly don’t tell them and one of them is in for a nasty surprise when the meaning of brq is revealed. A very gooey gunging and a hilarious clip all round.

Part 3 -
Anabelle and Michelle play Extreme Rock Paper Scissors, which is basically like normal rock paper scissors but involves gunge and topless nudity if you lose! There is a huge amount of gunge (as we recycle the gunge from parts 1 and 2 plus add some gellybath into the mix) and absolute chaos as the girls spend half the time splashing the gunge over each other rather than playing the game. At the end it descends into somewhat of a wrestling match, and the slimiest mismatch and arse kicking seen to man

Returning to matters more recent, Michelle Monroe, off of Episode 4, her of the lovely jubblies, gave us a glowing comment about us.

We here at messymayhem.com don't believe in blowing our own trumpet, but fuck it, tooodiddly doooo here's what she said about us!

"Aah, this shoot was so much fun! It has to be the best WAM shoot i have ever had! Gunging Rach was fantastic, i kept winning the games

I loved the coloured gunge, apart from when it mixed together and went black... yuk!! Poor Rach hahahahahahaha"

The poor Scouse git almost dropped his car stereo that he nicked when he saw that, and to be fair any praise from a model is high praise indeed. And she's done a few WAM shoots, and anyone whose has been following the Wamprincess thread on UMD knows thats she's a fiesty one! I'd like to say she was a real pleasure to work with and knew exactly what she was doing, even if she was a little "darius"! ("It's bloody grey"!!) Catch her in Episode 4 which is on the download store!

Like a small onion, that's shallott for this blog